Before I continue about my holiday I should disclose some family information.  I had 3 siblings, I was the second born.  I cannot say we had a happy childhood and this was because our father was physically and mentally abusive to us.  Mum was a quiet little soul and probably too frightened to say anything to defend us.  My sister Heather was three years older than me, she lived a troubled life and like me was always on the run to get away from our father. Heather passed away of kidney failure four years ago.   The third born was Donald, is now 68 years of age.   Donald has always had a nervous disposition, speech impediment and abused by our father. Donald found a friend in the bottle, was kicked out of home before the age of 20.  Never permanently employed, has been on a invalid pension since about the age of 25, lives alone in a council flat. Diagnosed as being an Alcoholic in his early 20’s,   was sober for about 40 years then started drinking again. Donald has type two diabetes, has a personal carer that visits his place twice a day to apply compression stockings, a cleaner comes once a week.  Donald is a good cook, does all his own shopping, and regularly goes out for coffee at cafes.

On the second day of my holiday Donald phoned at 7.30am to stay he was going to the podiatrist.   When I hopped on my bus to go to the city Donald as was the same bus, he didn’t recognise me, hadn’t seen me for four years plus I have stopped dying my hair.  That evening Donald phoned to say he had bought some steak and mushrooms pies and would be round for lunch tomorrow. He refers to Alistair as ‘the boy’, he asked me if the boy would be home because he had bought a pie for him too.

Alistair and Donald are the complete opposites, like chalk and cheese.  Alistair is meek and mild, often very quiet and rarely argues, ignores people that bully him. Donald is opinionated, says what he thinks, criticises and often offends people.

Donald arrives for lunch the next day.  He uses a Wheelie Walker mobility aid which he brought inside onto the carpet in the lounge.  Donald goes and sits in the kitchen and says to Alistair ‘well have you boiled the kettle, I am thirsty”.   While having a cup of  tea Alistair and I get the lunch ready. We had decided to make it into a meal and had previously prepared potatoes, carrots and peas.

Donald watches on and makes several critical comments to Alistair such as ‘why have you got the warming drawer on, you don’t need to warm the plates, you are old fashioned, the peas are boiling over, turn them down and don’t put so much water in them’. (Alistair ignored Donald).    Alistair stands watches the pots on stove, while the pies were heating in the oven.  We enjoyed  our midday meal.

I can’t forget to tell you what Donald said me ……” I didnt recognise you on the bus yesterday” “I thought who is this hagged old woman getting on the bus, she looks like she is struggling, someone should help her”.    I never know whether Donald has a dry sense of humor or is being dam right rude. Anyway I laughed it off and told me that I really don’t need help. Donald couldnt leave it at that , he then said ” while you are a here you should use Heather’s old wheelie walker, its in the garage”.  I told him that my doctor and physiotherapist don’t believe I am not ready for one of those , he replied “what would they know”. 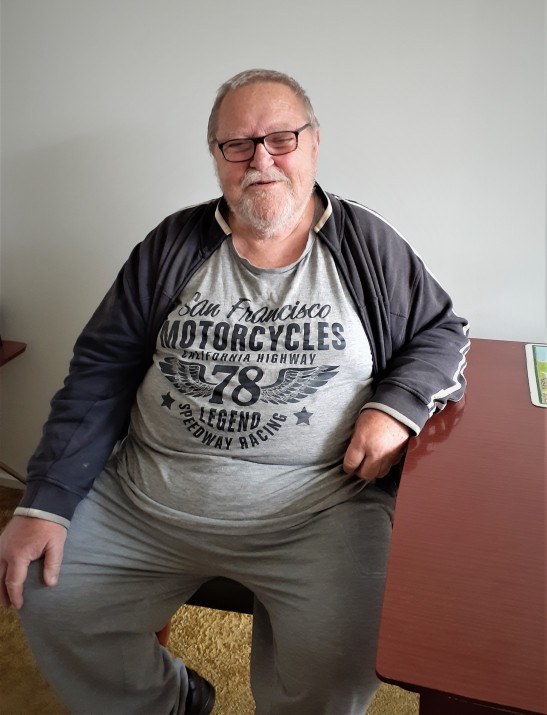 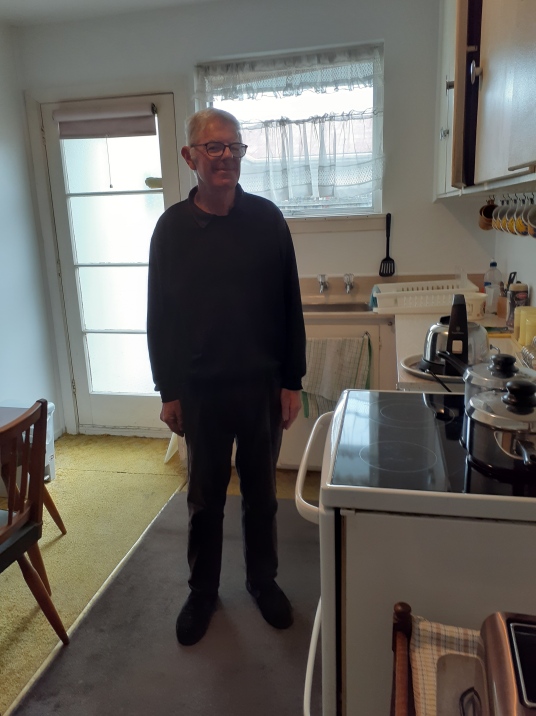 I knew what to expect before I went on my holiday.   Even though they are Kiwi’s I call it English Comedy ( that’s my secret), and it would make a great show.

The next day I went out in the evening with Alistair.   We travelled for almost 1.5 hours on a bus to Rangiora to attend a Community Dinner which Alistair attends once a month on a Friday night.

Prior to attending the dinner I had arranged to meet my friends Barbara and Owen that I hadn’t  seen for since Mum passed away in 2009.  They live in a rural area out of Christchurch and were happy to meet Alistair and I in Rangiora.  We had a lovely catch up a local Café . 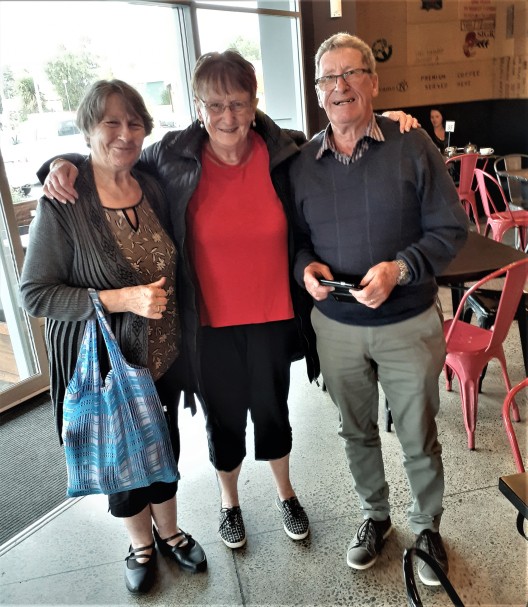 After our coffee and chat Barbara and Owen gave us a lift in the car to the venue. That was real life saver because the weather has changed to cold, windy and wet.

The community dinner was put on by the Baptist Church and is for people with disabilities, $3 a meal followed by entertainment.  We enjoyed a light finger food meal with savoury and sweets with a cuppa.  Alistair doesn’t see himself a having a disability, God Bless his little cotton socks, he sees himself as a volunteer.  When it was time to say ‘grace’, Alistair calls out ‘QUIET PLEASE’…..it did the trick 🙂   Families and carers accompanied people with disabilities.   I saved Alistair a seat next to me while he was away helping, meanwhile I was in my element sitting at the table and helping with those around me.  I used to work as a nurse at a Psychopaedic Hospital, that was when children even with a mild disability were  placed in an institution away from society and often forgotten by their families.

After dinner we moved to another area and sat in rows ready for the entertainment. This part of the evening was thoroughly enjoyable. People were offered an instrument to play along with the music and singing. I took a mini Tamborine to play, others have triangles, little drums etc.  We sang Songs of Praise choruses, many of the people got up and danced. 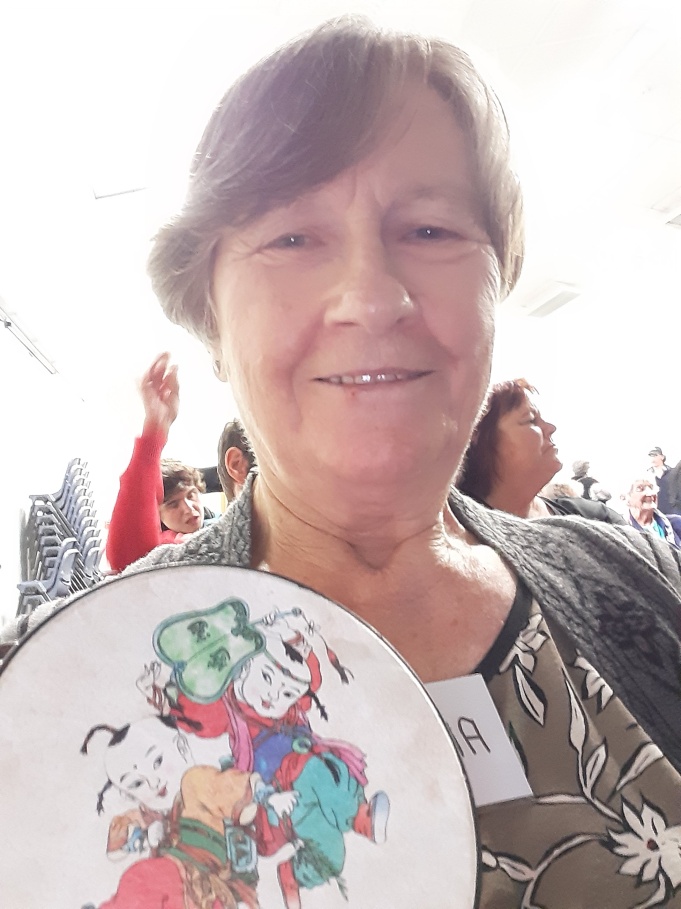 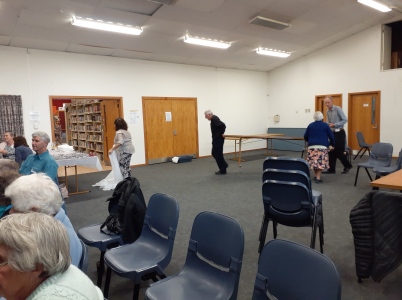 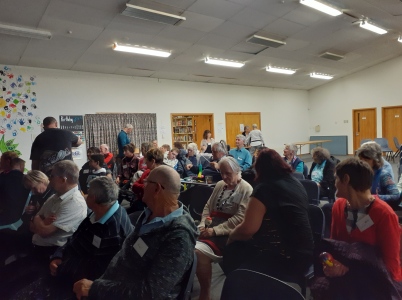 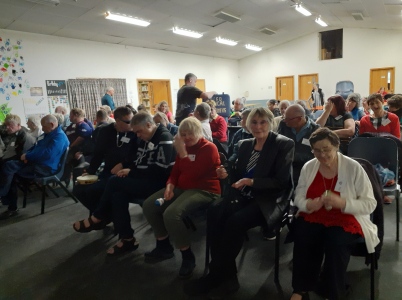 I did do a video of the singing and dancing to share but unfortunately my computer won’t let me load it on.  Alistair kept working helping put tables and chairs away, you can see him in the top photo on the right.  The community dinner and singing was beautiful. They are having a dance in April.

Alistair and I have a mutual friend Beryl that attends the community dinner. Beryl’s sister Paula has an adult son that has a disability.  Beryl and Paula are members of the Baptist Church.

After the event was over Beryl drove Alistair and I to her place for a cuppa and cake.  Beryl is 78.  Her first husband Barry died of MS , her second husband died of Bowel Cancer,  her third husband is always away visiting his family.  Beryl is a good friend to Alistair. 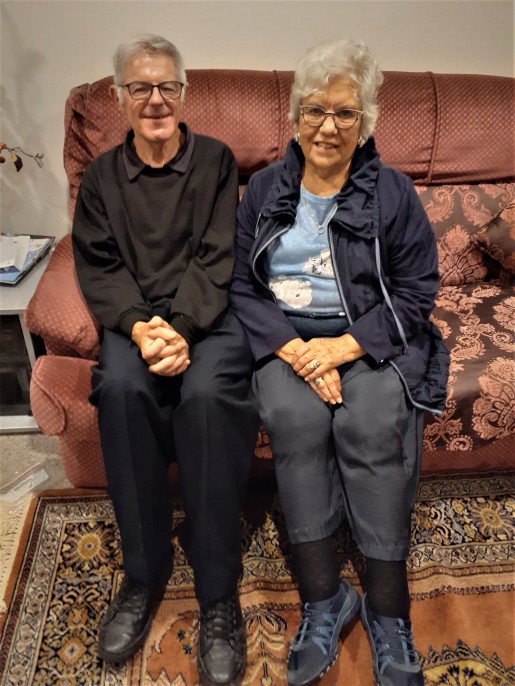 Thanks for reading my blog…..Part 3 comes tomorrow.