I had seen local ads on the net advertising exhibitions at the Museum of Brisbane.  I was interested in seeing ‘Micro Histories and Fashion.

I decided  yesterday that I would venture into the city on Sunday.  I live on the north side of Brisbane CBD.  I never drive the car into the city these days, public transport is just fine for me.

Today I started my journey from the Mango Hill Train Station, it’s quite new and even has lifts and an overhead walkway  to get over to the other side of the track.  The journey takes about 40 minutes. I took a photo of me waiting at the station and put it on Facebook, a friend immediately commented that I should smile because it might not ever happen, she thought I worried. ( I am not good at taking selfie’s). I took another once seated in the train and did my best to smile. 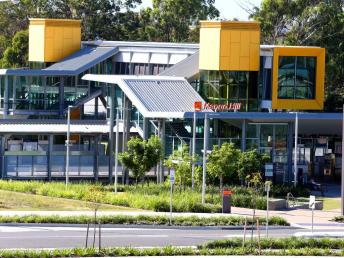 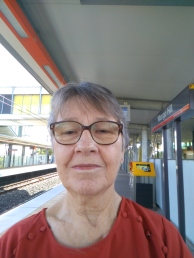 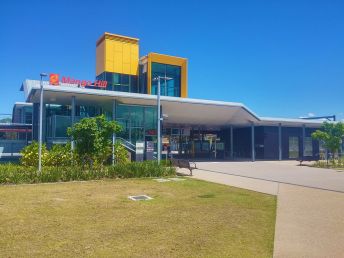 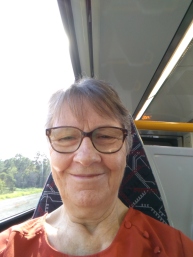 I was pleasantly surprised to see some Aboriginal Art Work on the exterior of the train but needed to wait until the train arrived at my destination to take the photos that I couldn’t resist. 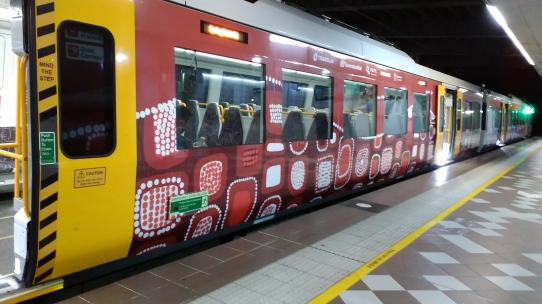 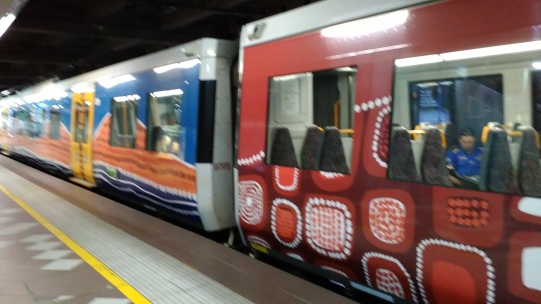 I disembarked at Central Station.  My journey now is walking everywhere, pleasant day, blue sky and not too hot.

I love taking photos with my cell phone. The first place of interest was a heritage listed building. It was originally called ‘People’s Palace – a temperance hotel owned  by The Salvation Army. It was a place of sobriety, safety and peace.   It was later sold and is now called ‘Base Backpacker Brisbane. Directly across from the Central Train Station which is great for tourists 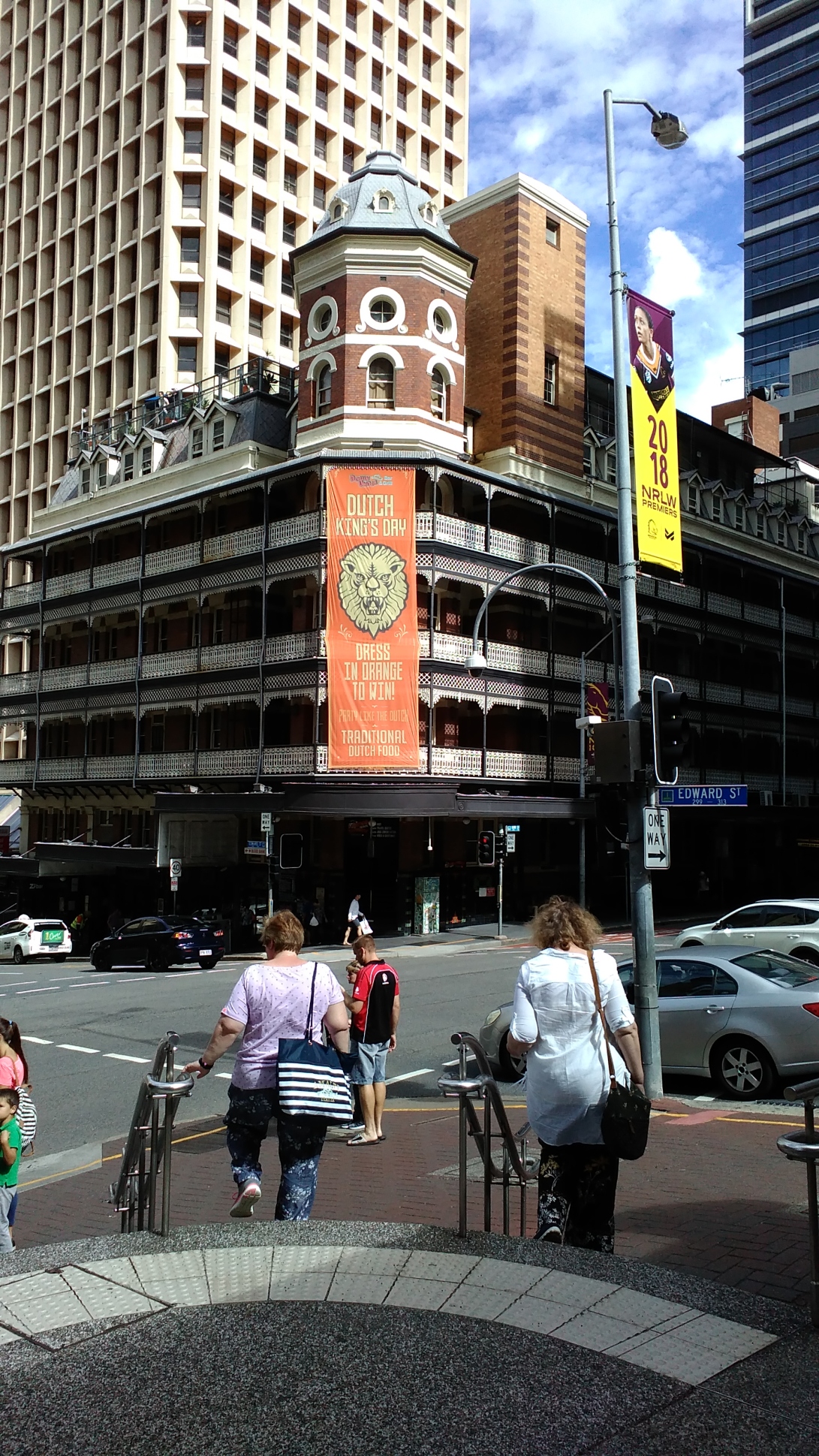 I mentioned Central station. It is not considered to be the main railway station in Brisbane.  Roma Street Station is the other station which caters for local and long distance train travel, also has a bus station. Anyway back to talking about Central Station, its in the heart of the city, a very busy station for locals and visitors to the city.  My impression of the station is that it is a real eyesore and let down to Brisbane City.  I took one photo from across the road looking towards the eyesore. The other photo was taken while I was walking on the ramp up to the station ( shouldn’t written about this later as it was on the way back to head home) . The ramp is a bonus, it feels like it is padded with rubber, so comfortable to walk on after a long walk around the city. 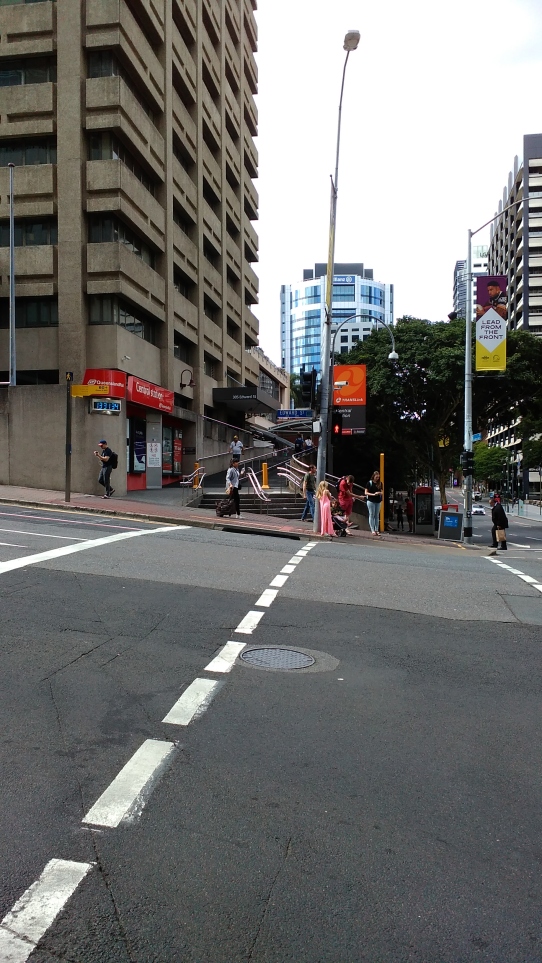 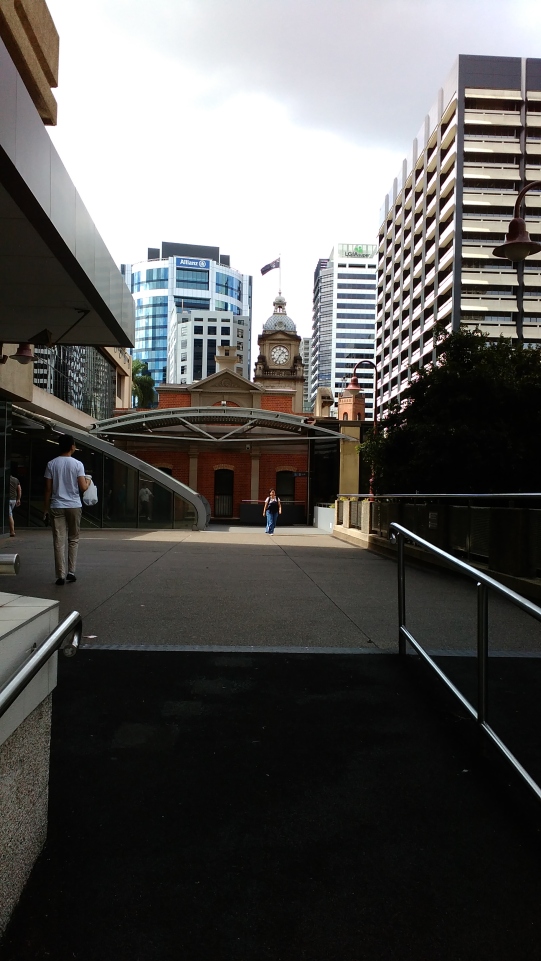 I decided to walk along a road which I don’t normally use often to get to the Museum of Brisbane. I spotted The Salvation Army Brisbane City Temple.  I paused for a moment to read the history plaque  on the building. A man in his 70’s dressed in Salvation Army Uniform greeted me. There was no pressure  just a friendly hello and how are you. I spoke to him about what time the service would start. It used to be at 11am but now 10.45am.  I looked at my watch , it was now 10.30am and then without hesitation I went inside and sat down.

In my younger days I used to go to the Sallies all the time. I started going in 1960  I got married, we attended the Sallies and had our children dedicated there. This all happened why living in New Zealand. I stopped going in 1983 when I when through a disastrous time, that’s another story.

Here I was this morning sitting in the temple feeling quite at home and comfortable. Today is Palm Sunday, beautiful service and sermon. I used to play a cornet in the band and sing in the songsters so it all brought back wonderful memories.  I sat with retired Army Officer’s  Ron and Bernice , Ron was the lovely man who spoke to me at the door. I might even go back next Sunday. 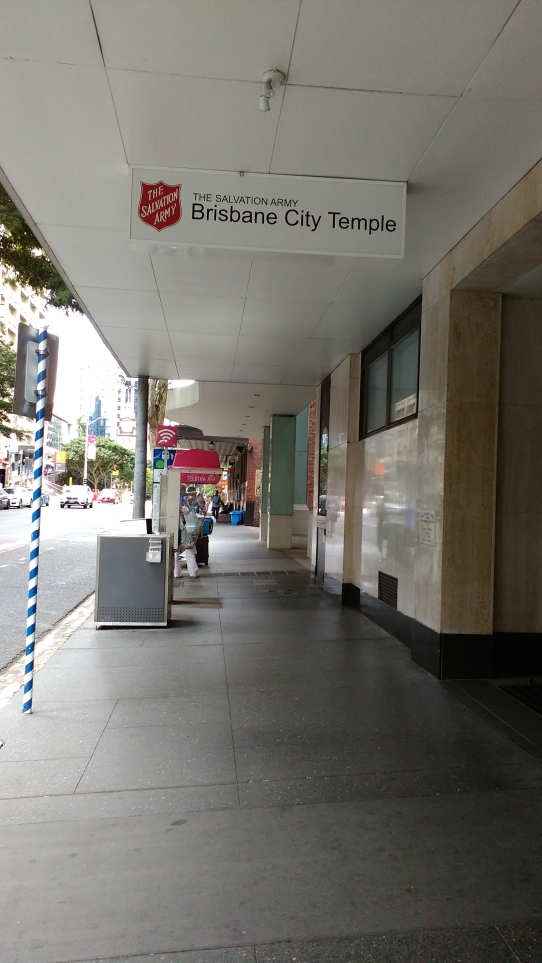 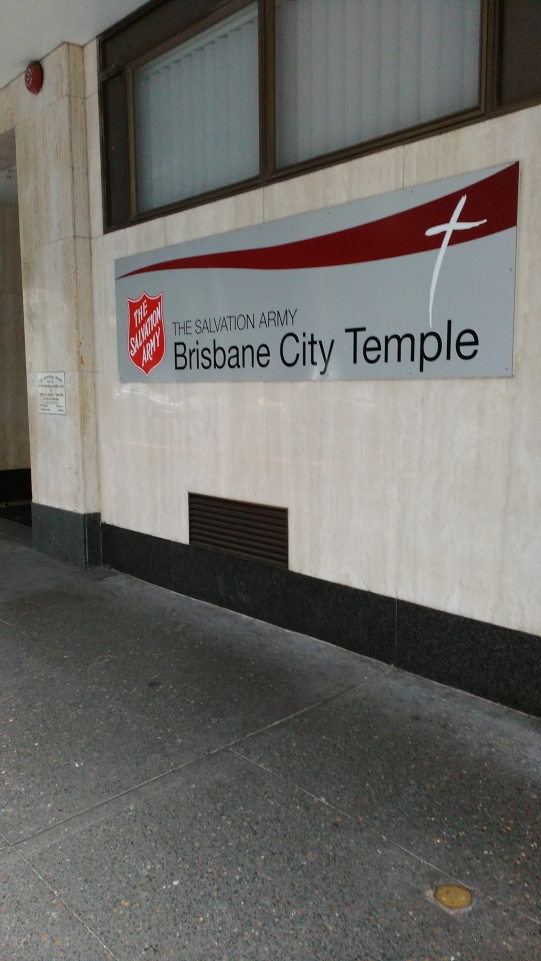 When the Palm Sunday Service was over I headed for the Museum of Brisbane which was is part of the Brisbane City Hall.  I attended a ceremony at the hall in 1997 when I became an Australian Citizen. 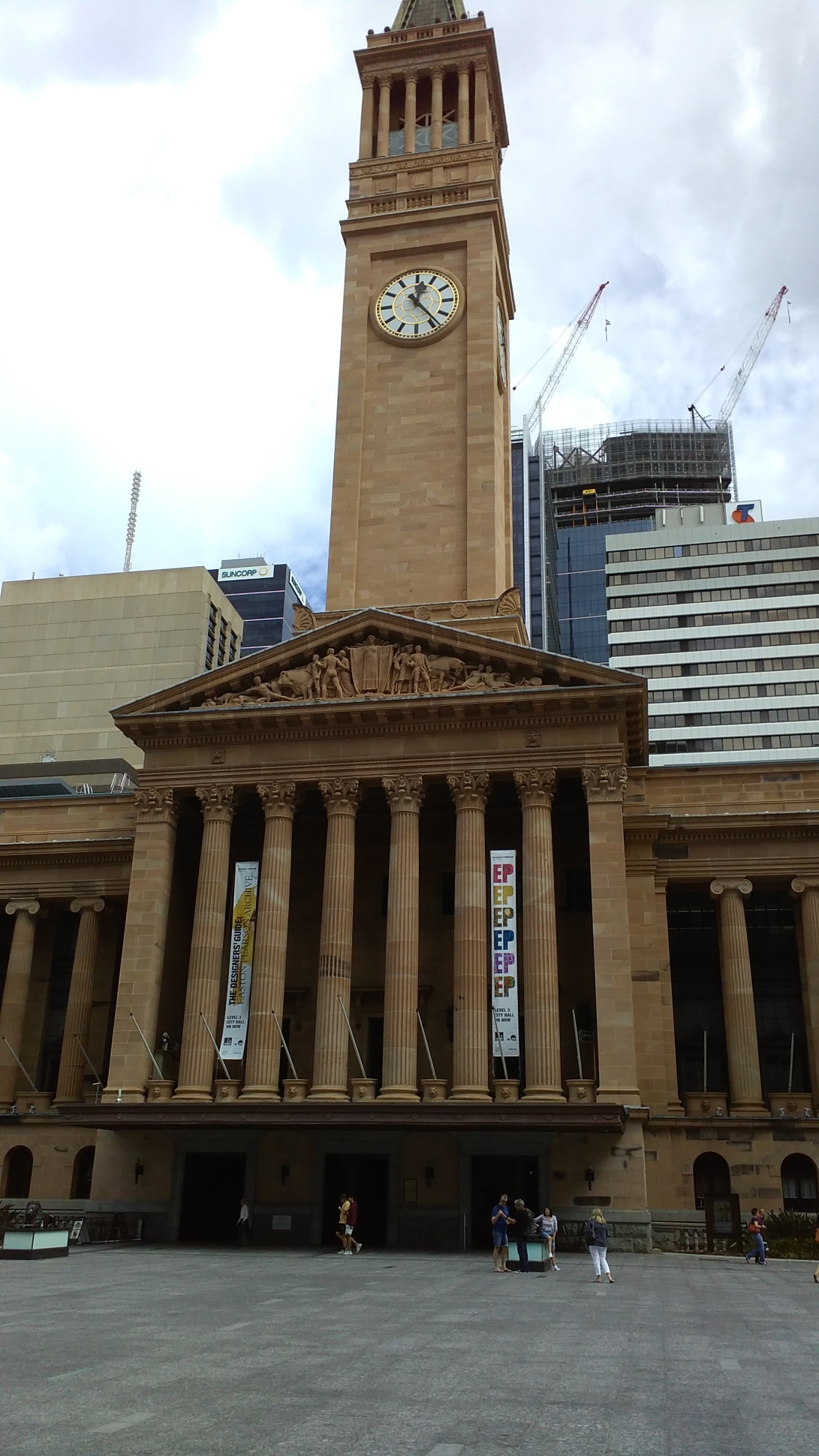 By the time I got inside the hall and made my way up the lift to where the exhibition was I had lost my motivation,  my cataracts were giving me grief, my vision was rather blurry, plus my dry eye condition was causing my eyes to water – the joys or the pits of aging.

I did look briefly at ‘Micro Histories’ – Artworks and artefacts are paired with buildings by six of Brisbane’s most exciting architectural firms in Micro Histories, an exhibition exploring the relationship between architecture, art, people and places.

Once outside again I took a few more photos because afterall  the visit to the city was to be learning about architecture. 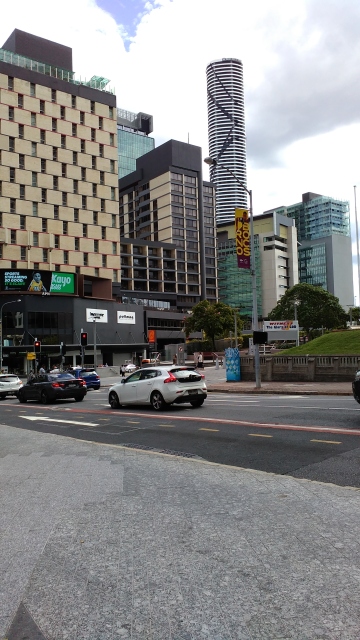 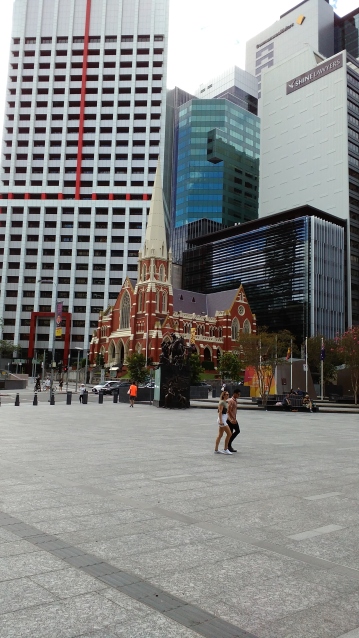 My stomach started growling at me. I headed to Mos Burgers – Japanese infused. I have been there several times. Today I ordered Crispy Fish which was truly delicious.  No after effects, no reflux, plus economical lunch $6.00. 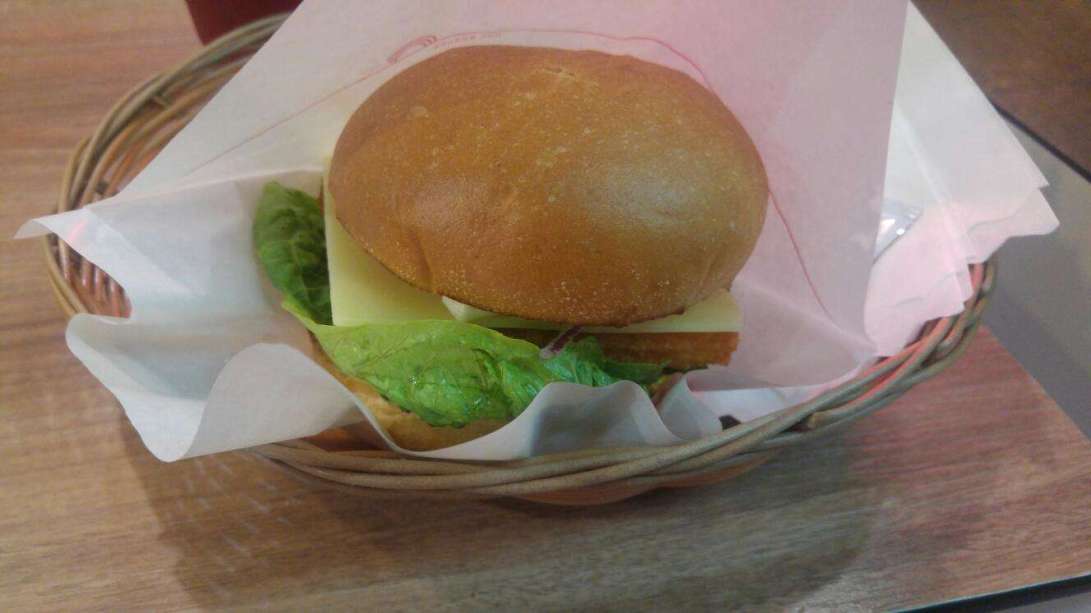 After lunch I popped into a little shop that sells essential oils and diffuser’s  etc.  I recently bought a set of three essential oil online  – Calm and Relax Set.  I have got a diffuser so that’s good.  Today I was looking at ‘carrier oils’ which is something I didn’t think to get with my order. I was amazed at all the different types of oils.  While in the shop I had a sample of hibiscus tea.

Time to head back home. Back at the lovely Central Station it would be 16 minutes until my train was due to depart. I was feeling a little dehydrated so I bought myself a 50 cent ice cream from MacDonald’s , but not with the flake.

I was once told by a student doctor that those ice creams were made with pig’s fat, he would eat one every day.  Paleo which I quite like wouldn’t mind if it was just pig’s fat but MacDonald’s website give the ingredients in details such as  – milk, cream , sugar, flavouring etc but no pig’s fat mentioned. 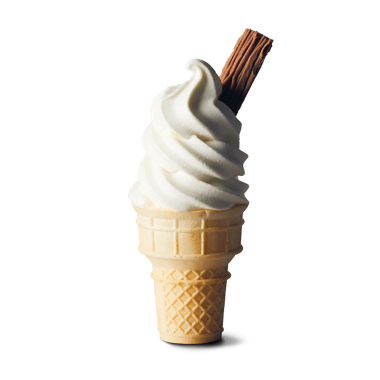 Well that was my Sunday Escape From Four Walls.